This is the first "chapter" of the book in english. I hope I will have time to translate more in the very near future. Bear in mind that the text has been written more that 15 years ago, so the naivety of the style will hopefully be excused...

I knew.
I knew that if I started to write I could not stop anymore.
I knew I could, but I was afraid to begin.
This lasted a few years. I wrote in the mean time. Little. Timid. Without volume, without mass. Just light.
The thing I’m afraid the most is the trance. The PASSING stage. The VESTIBULE. Where the passage between the two worlds happens. Between REALITY and DREAM, between EVERYDAY and FANTASTIC, between ORDINARY and UNUSUAL, between EARTHLY and HEAVENLY, between UNKNOWN and REVELATION, between OPAQUE and TRANSPARENCY TO ALL. I am also afraid of CHANGE. What if I cannot return? What if, wanting, I could not return? Would it be possible that the other world could cause irreversible change that would make this present world seem obsolete? And the sadness… To live imperfectly after you have seen perfection. To have the vivid image of the transcendent and to continue living in the dust of imperfect reality. It sounds like a punishment.
On the other hand, none of these is certain. One cannot say until it’s verified. It’s the same as it is with the “other” world, the one after death. The only connection is faith. All you can do is to believe and to hope. There is no certainty, there is no contact, and no verification, only hope and opinion. Maybe all my beliefs and hopes are false, and have no basis. This is another reason for fear. As the monks are saying, the fear of God is not the fear of His punishment, but the fear of not losing that tiny fragile thread that is connecting us with Him.
As you can see, my universe is made out of lots of doubt and hesitation. Belief, and hope. The hope to have enough faith. Made of living and dreaming. Of many things. Fortunately, and unfortunately. Sometimes, of reverie, and revelation. Sometimes…
The struggle to live as an idealist in a material world. The temptation of the absolute and the absurd ambition of perfection. The pain of the unaccomplished. The diffidence of making the unavoidable mistakes of any kind of creation.


Eventually, I started to write, more and more, as the daily chores permitted, the chores I could never waive, due to imperfection and material needs. Imperfection – same as myself. Same as everything around us and everything we do.
Posted by Horia at 3:46 PM 2 comments 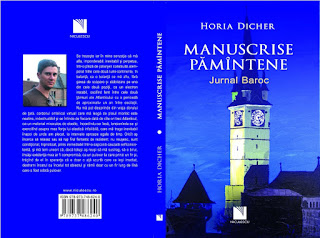 "BIRDMAN" and art... (finally something in English)

After seeing Birdman, the movie, I get shivers and these:
* <THE TREND OF TRAINING FOR INCREASED MASS MADNESS THROUGH ART>...
* <ART HURTS; THE ARTIST DIES MANY TIMES OVER...>
* <TO UNDERSTAND ART IS TO LIVE ART; AND THAT MEANS TO GO SO MANY TIMES OVER THE LIMIT AS TO BE ENOUGH TO DON'T CARE IF YOU DIE...>
* <RANDOM ACTS OF LIFE / "ACTING OUT LOUD">
* <THE SECRET IN LIFE IS BEING SMART ENOUGH TO KNOW YOU ARE A LOOSER AND THEN TO STILL TRY; THE BEAUTY OF IT IS TO SUCCEED>
* <NOBODY EVER LEARNED ANYTHING FROM A SUCCESS... IT TAKES A FAILURE TO LEARN A LESSON>

ALMOST 3 YEARS SINCE THIS BLOG AND "THE LAUNCH"
Posted by Horia at 1:53 PM 0 comments

We do not use cookies except what our platform provider - Google Blogger - is using, and which we do not control.
We do not collect information from users in any way, except again what our provider at his sole discretion can perform, and which we do not control or limit in any way.
We decline any liability for such actions, as we restrict our activity to only publishing and maintaining this blog.
To find out about Google privacy policies, visit:
https://www.google.com/policies/privacy/